RAPPORT // Greta Thunberg is Saving the World with Courage and Connectivity

One day before #schoolstrike, the biggest day of global action focused on climate change, 16-year-old Greta Thunberg was nominated for a Nobel Peace Prize. In August 2018, she sat every day for three weeks outside the Swedish parliament in an independent protest. By January, she stood courageously before world leaders at Davos 2019 with a call to “hold no bars.” The day of #schoolstrike, an estimated 1.4 million inspired young people in 2,233 towns and cities across 128 countries stepped out of schools and into the streets to add their voices to hers.

In little less than a year, this young global warming and climate change activist ignited a global movement. If Greta wins the Nobel Peace Prize, she will be the youngest person ever to receive such an honor. (In 2014, the prize was awarded to Malala Yousafzai, who was 17 at the time.)

What started as a solo protest only months before became a mass movement. With her conviction and message, Greta has raised awareness and action for a cause vital to the life of our planet. She also has given credence to the power of hyperconnectivity. In our state of constant, complete global connectedness, one voice can reshape how individual voices are heard and how value systems and social norms can be altered. 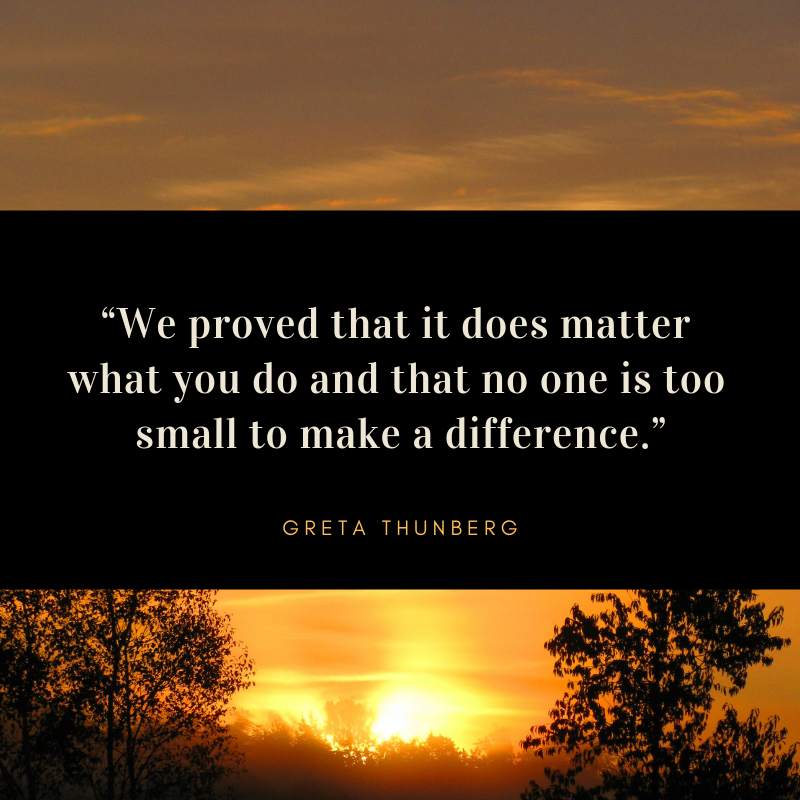 How did Greta inspire such a massive movement so quickly? She documented her efforts and actions using easy and accessible tools such as Instagram and Twitter. She put wide-reaching platforms to work for constructive purpose.

In just two short decades, the web and social media platforms have made it quicker and easier to find people who share experiences, beliefs, fears and passions. These technologies can foster shared ideological connections. They also represent a platform to advocate. Greta has used them wisely. She has harnessed their inherent function to augment her own voice with others’ who share the conviction about the critically important climate issue.  She has held leaders accountable – across organizations, cities, and even countries.

When these issues are debated in the public arena, we find points of confluence between groups with disparate identities. They create opportunities and imperatives to examine our own positions. In so doing, they reform how we consider our individual and collective roles in society. As Greta has proven, these societal collisions test the balance of power between institutions and people.

Whether you think that’s a good thing or a bad thing (sometimes it feels like it’s getting out of hand) we can’t dispute that these public platforms are changing individual and collective social values. They are leading to new and different ways of defining and identifying others and ourselves and driving productive debates on a more integrated, global front.

As to Greta and her growing number of followers, my hope is that they continue to speak truth to power. And to those of us leading today’s organizations and others who have the power to take action – my hope is that we do not dismiss new voices just like hers because they are young and inexperienced. Today’s leaders must get above political noise. It’s new mental models for problem-solving, amplified by responsible use of connected platforms, that will create a better future for all of us.

The focus must be greater than just what can be done today,
but what must be done for tomorrow.

Personally, I believe climate change is real. It’s an immediate need with lasting implications. It is and will continue to severely impact our planet and the future of humanity. I have witnessed it and have called for it. Others have too – Norwegian parliament member Freddy André Øvstegård gave the reason for Greta’s nomination – and it goes beyond the environmental impact of climate change – “We have proposed Greta Thunberg because if we do nothing to halt climate change it will be the cause of wars, conflict and refugees. Greta Thunberg has launched a mass movement which I see as a major contribution to peace.”[1]

Given all this need and broad impact, I support the actions taken by Greta and the movement she has started. I hope even more students will strike on April 15, the planned date for the next strike. My support is for voices to be heard, serious attention to be paid, and actions to be thoughtfully considered with new mental models and taken by those with the power and authority to make a difference in their own circle of influence, no matter how big or small it may be.