Will Business Lead the Next Era of R&D Investment? 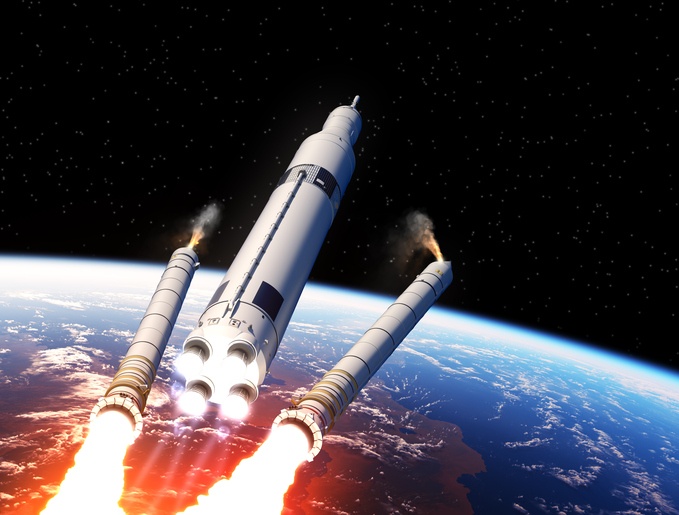 If you’re like me, you marveled at Elon Musk’s SpaceX launch and safe return of the Falcon Heavy rockets. I imagine that when NASA’s Apollo program made it possible for mankind to take its first steps on the moon, it gave people even greater feelings of amazement and wonder.

While both of these monumental feats of engineering, ingenuity, and creativity produced awe and changed the world, there’s a significant difference between the two. SpaceX is a privately held company. NASA is a taxpayer-funded government agency.  Space exploration is just one example of increasing disparity between the contributions of private and public entities to fundamental advances in infrastructure and innovation. We’ve reached a point in the U.S. where it’s become necessary to consider the large, strategic question of responsibility – notably, what will be the role of government in the future? And as its role evolves, what will be the impact to constituents and other organizations?

The Definition and Changing Context of Government’s Responsibility

As geopolitical changes unfold, we see a rising need to blend and balance responsibilities between public and private entities. This new collaboration model has implications for leaders in industry and government, as well as for their constituents and consumers.

As the story plays out, winners and losers will emerge across industry, civilian, and government groups.

Winners in a revised categorization of government responsibility:

Losers in a revised categorization of government responsibility:

Over the past 35-40 years, research and development (R&D) has changed dramatically. As such, it offers an especially instructive demonstration of the changing role of government and downstream implications across broad swaths of society and the economy.

In the Cold War era, the government stood up defense-related organizations like the Defense Advanced 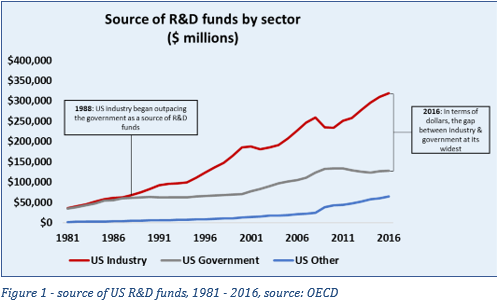 Research Projects Agency (DARPA). Their specific role was to lead innovation and provide funding streams for R&D in the private sector.

Other government organizations, particularly in healthcare, underwrote significant portions of the overall U.S. R&D market through the mid-1980s.

As Figure 1 shows, a significant split in the source of R&D funding happened around 1988, as the private sector began to drive more efforts. Private funding began to outpace the growth of government spending significantly. Perhaps not coincidentally, the fall of the Soviet Union also was imminent in 1988, which reduced the need for as much government presence in R&D.

By 2014, the entire Top 10 list of R&D spenders was composed of private technology, transportation, and health industry firms.[1] The trend continues – corporate or individually controlled R&D investment and technology advancements continue to outpace government-sponsored projects (as we are seeing with advances coming from SpaceX). In addition, there’s a growing resistance among tech firms to work with government (such as Google’s decision to end its relationship with the Department of Defense).[2] The moves threaten to expand capabilities and productivity gaps even further.

There is no doubt that society benefits from private industry investments in R&D, but downsides exist. Companies are beholden to owners and shareholders for ROI. New patents and IP for anything from medical breakthroughs to more fuel-efficient vehicles are closely guarded company secrets. Some experts fear that as the private sector monopolizes R&D, we risk losing the economic benefit of “spillover” – the “benefits not captured by the party that funds or undertakes the research.” [3] 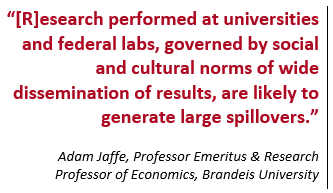 Potential issues aside, the massive power shift to industry also forces us to reassess the proper role of government in R&D. What is the best path forward for the government in the facilitation of new technology, cures, or other innovations? Should taxpayers demand the government focus only on setting policy, and leave the arduous (and potentially more lucrative) work of exploration to industry?

Particularly for taxpayers, it’s important to ask questions such as:

Despite the challenges, for the most part, government entities are working to sustain or establish control over key areas of R&D. In part, the push is driven by global competition, particularly from adversary countries whose governments are succeeding in making rapid advancements and closing long-held progress gaps.

Around the world, we’re seeing indications that the trend toward more government involvement in R&D may be turning. Interestingly, in some of these cases, it’s the government that is pushing for the innovation to solve a social or environmental issue, and the private sector that is following their lead.

In Estonia, for example, the government led the charge to become a global leader in technology. Rather than putting its focus on more technology development, the leadership prioritized education and efforts to transform legacy thinking.[4]

Another example is happening now in the rapidly urbanizing city of Phnom Penh, Cambodia.  Unfettered use of plastics and Styrofoam containers has overwhelmed landfills.[5] The situation created an urgent need to curtail use, so the government has partnered with private sector innovators to begin production on biodegradable materials and has also levied fees on consumers who opt to package their purchases in plastic bags rather than reusable or biodegradable options.

Whether led by commercial or government sources, sharing the responsibility for R&D raises conversations about ownership and liability. As more private sector companies and contractors perform the work, for example, government hiring priorities and skillsets are including fewer executors and more managers. Particularly in industries where fewer private businesses have a historic foothold, the shifting balance will demand that government agencies are agile enough to move away from a budget and resource allocation mindset toward one centered on industry or business transformation.

What’s Next for Society

Given the benefit of historical data, anecdotes from the U.S. and abroad, and educated guesses, we can project that aspects of the government mission area will change, leading to more and new opportunities for the private and NGO sectors.  Many areas will remain intact, particularly those dealing with national security and the tools to hold government – and its endeavors – accountable. We will continue to see winners and losers within government and business entities. This is a zero-sum game.

Determining an appropriate path forward should begin with a critical examination of what government does well and where business/industry should assume the mantle. Where do the greatest strengths reside? With those core capacities as a roadmap and budgets refocused, the next step likely will be to purge “legacy thinking” that tries to place the burden where it should not lie. An openness to shared outcomes and responsibility may be our best bet for driving the kind of partnership and balance we need to get the most from R&D opportunities and keep the U.S. securely positioned for global leadership in key areas.

It’s time to re-examine the roles of government and private entities in American R&D initiatives. 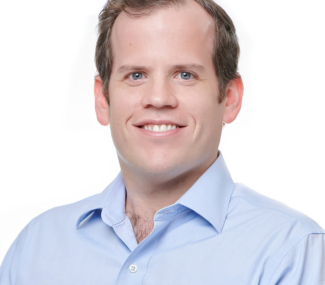