Your New Year’s Resolution to Change is Too Limited 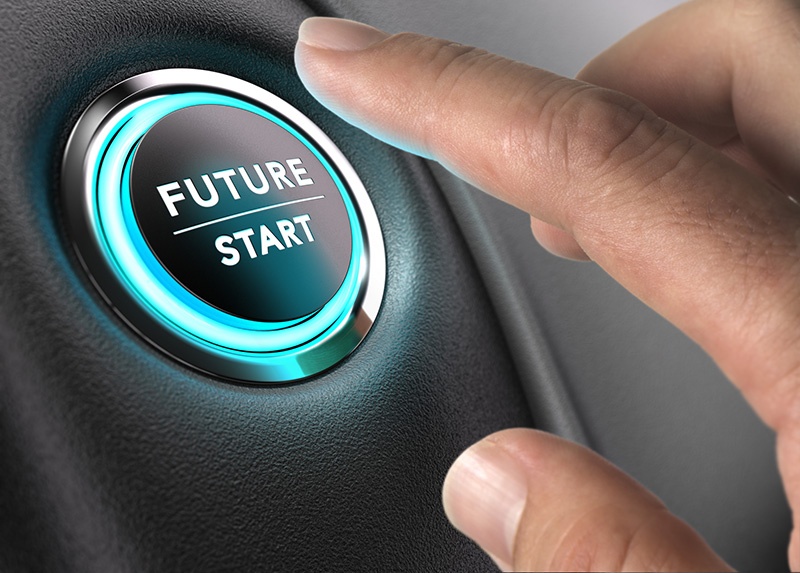 January is a time for resolutions. For many people (and businesses) the first weeks of any new year are given over to setting goals and shifting priorities. Many of these objectives relate to how we will “change” or “transform.” Despite our best intentions we more often than not fail, as any number of articles about keeping resolutions will tell.

The problem is largely semantic. We tend to use “change” and “transformation” interchangeably. They are not the same. In fact, the failure to distinguish between change and transformation can have serious consequences for leaders working to develop actionable and productive strategic plans. The Harvard Business Review does a good job of articulating the issue, “Many managers don’t realize that [‘change’ and ‘transformation’] are not the same. And while we’ve actually come a long way in learning how to manage change, we continue to struggle with transformation.”

Years ago, Alvin Toffler identified the inherent tension between the two concepts. He advised, “You’ve got to think about big things while you’re doing small things, so that all the small things go in the right direction.”

By definition, change is a process. It can be incremental and subtle or it can be huge, but it must be consciously tracked, sustained, and curated. Effective change requires thought, effort, and persistence. Success can be benchmarked.

Change and Transformation in the Organization

Effective leaders manage day-to-day incremental changes that keep an organization current. They also remain vigilant about understanding the bigger picture so they can facilitate truly sweeping changes. Balancing these demands the ability to differentiate between the two. 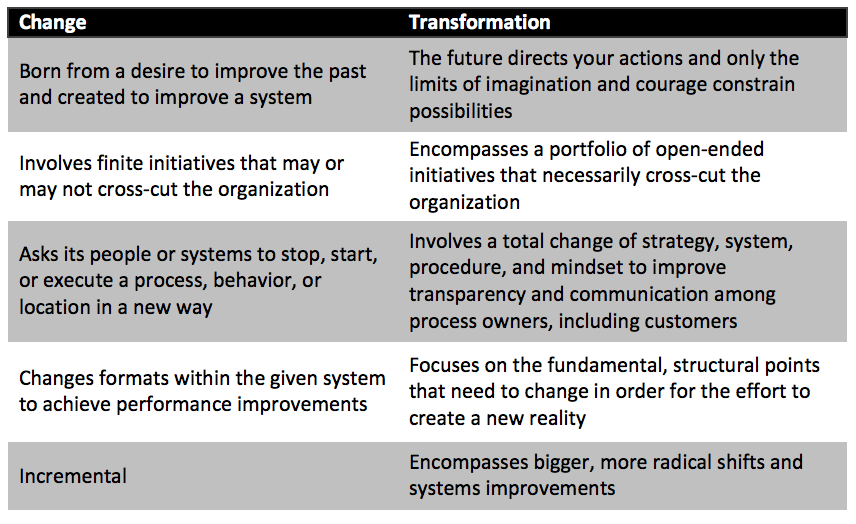 Fundamentally, what we need to remember is that change is incremental. Transformation is major. It is a result of many changes. Often, it is not born from a preference – rather, it is a necessity that has grown out of a resistance to change.

The Role of Change Management in Transformation

Many organizations invest in Change Management as a means of implementing finite initiatives that may or may not cut across the organization. The focus is on executing a well-defined shift in the way things work. Such change is necessary to retain industry leadership and can improve profit, efficiency, and return on investment. But the effort seldom results in innovation or changes an established paradigm. And even if Change Management successfully executes on certain initiatives, the overall transformation could still fail.

Unlike Change Management, transformation is an effort to change a paradigm or foster true innovation. Rather than centering on discrete, well-defined shifts, it engages a full portfolio of interdependent initiatives. Its objective is to reinvent the organization by discovering or recreating a business model based on a vision for the future. It’s much more unpredictable, iterative, and experimental. It entails much higher risk.

Understanding these differences is vital to providing your organization with leadership that will make it stand out from the crowd.

The Christmas 2016 shopping season saw $92 Billion in online sales – an 11% increase over 2015. This significant bump in online spending “reflects a long-term shift in which shoppers are choosing the convenience of swiping, tapping and clicking over a trip to the mall.” Amazon was responsible for 38% of this year’s online bonanza. As they have focused on blurring the boundaries between real-world, online, mobile, and now even voice channels, Amazon literally has transformed the retail industry, the way people shop, and the global economy.

Comparatively, UBER has transformed how people commute and travel. In putting their focus on changing a common behavior rather than on tactical elements of the car-for-hire model, the company sparked the emergence of numerous ride-sharing competitors. They’ve even influenced development of autonomous vehicles and collaborative efforts between major car manufacturers like Ford, Fiat-Chrysler, BMW, and Mercedes.

These companies are set up for innovation, continually coming up with new ways to think about and shift behaviors, and allowing that to drive their strategic decisions. It’s important to recognize that transformative ideas can come from anywhere. Case in point, consider how these leaders re-shaped our world:

Each of these people had a vision that would go on to alter the predictable. This is the hallmark of transformational leadership. They set the stage for transformation, and then engaged others in understanding and implementing the myriad of incremental changes vital to success.

Transformation is driven by a vision of a new world that could be. Transformative leadership is the ability to articulate a vision and the wisdom to see past certain events in expectation of a greater outcome. If you have resolved to change in 2017, take a moment to envision what your organization could become if you instead resolved to use change to transform.

It’s time to imagine what transformation could look like and to enable your organization to bring vision to reality through focused change.